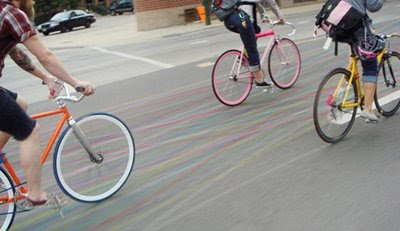 It seems like an environmentally and legally safe way of sticking it to the man, which is naturally attractive, but the cumulative effect, the layers and patterns from multiple riders and multiple trips actually and definitively redefining the space, is even more so. And thinking more on what it would actually look like, I can imagine that other cyclists and even motorists would unconsciously treat the made path as an actual bike lane. And I like this form of self-reliance.

Corpus Christi's Metropolitan Planing Office estimates the cost of creating bike lanes at $5,000 per mile. I don't know what's worse, this inflated figure or the possibility that it isn't inflated. And whether the lanes actually cost that much, I have no doubt the city would pay that much, which isn't right. It's a waste, not because there's better use, but because that's too much to spend. And the paths the city's already installed are either too wide, too narrow, chip sealed, mined--it's like Goldilocks on two wheels.

How wonderful, then, would it be to just do it ourselves. Make our own path, a beautiful technicolor path of perfect width. Because this kind of path says far more than "you're allowed to ride here." It says "we've already ridden here." The path transcends from municipal appeasement to historical record, to artifact, the evidence of a journey. Eventually the paths would communicate the existence of community. And from the fading lines and multiple colors, one could read a symphony of travel. It would become a visual language, the same poem written over and over again by hundreds of poets until it meant something completely different. An effortless organization of pathways enriched from traffic.
All hypothetical, I thought, until this past weekend. I was riding on Bee Caves road in Austin and saw these very contrails laid in monochrome in the wet dust along the shoulder after a light rain. I was returning to my cousins' house after a strong group ride and couldn't wait to be home. Looking down I saw the braided paths of earlier riders and was reminded of everyone I'd ridden with before that day and since. And I laid down my own path, unique but indistinguishable, to be washed away like my name carved in the sand.
Posted by bloggerz