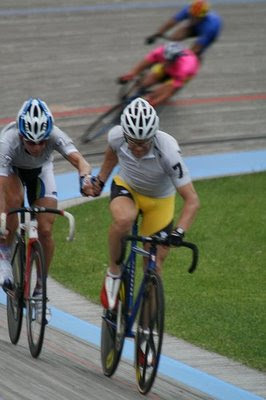 I don't mean metaphorically. Twice now, in my riding, I've received a helping hand. The first time it was such a novelty that I didn't think much of it, but after Wednesday night's hammerfest, I've started to think about it more.

Earlier this year I was in the a-group on a fast evening ride and I was, at that moment, leading the pack. Two riders had escaped and I was part of the group chasing them down. The rider at the front of the pack tires the fastest because he faces the full force of the wind and so riders in a group rotate to share this burden. This night I had lead the chase group for longer than I needed to because I was so close to the escapees and I wanted to be the one to bridge the gap. I was struggling and almost made it before I had to slow down from fatigue. At the very moment I slowed I felt a hand on my back. Another rider understood what I was trying to do, that I was working for everyone else and that I needed help to continue doing it. And so he literally put his hand on my back and pushed me forward.

Two days ago it happened again. This time, a good friend saw that I was falling off the back. So was he, but he realized that either one of us could fall off or both of us could. Without discussion he decided to push me back into the group and effectively take himself out, to ride the remaining 10 miles home alone.

That the helping hand is literal, that it is felt and that it is so immediately and obviously effective is one of the many things in this sport that break my heart. The tactile selflessness doesn't need any explanation to be perfectly understood.

Tonight I finished Andy Hollinger's book Hangin' On and in the final racing scene he writes about this very same push:

Between the heat and pace, however, Jerry's strength began to fade. He couldn't hold the wheel. After several minutes of being only a few inches off, he was now several feet. Jerry kept himself from surrender simply with conscious, focused will over his legs...Tommy reached over and gently pushed Jerry's back till he was moving up a bit. This forward motion was all Jerry needed and he quickly gianed the wheel in front.

The thing about pushing another rider is that Newton's laws immediately come into effect. Like the cue ball, the supporting rider transfers his momentum to his teammate. Here's a video that demonstrates this in the Madison race, an event which relies on this technique (cue to 3:18):