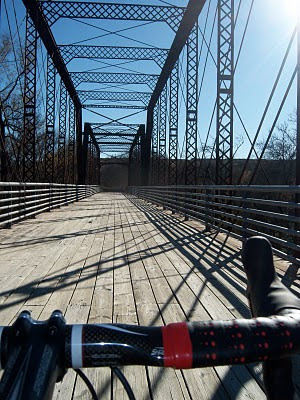 When I set out to ride last Saturday it had been raining all day and it didn't let up just because I got out on the bike. I headed out pass the airport through Moore's Crossing Park and over the bridge. I was playing a mix of the Yeah Yeahs, Yellowcard, Weezer and Baby It's Cold Outside covers. I came up the ramp cleanly and felt good tightroping the 4" planks crossing Onion Creek. What I didn't plan for, though, was the combination of wet brakes and wet wood. Once my brakes finally caught, it didn't matter and so my crash was more like a disco move, a panic'd electric slide.

Crashes in the rain can turn out alright sometimes and this was one of those times. I got back up in front of an historical marker sign and read that this particular bridge was once one of six spans over the Colorado at Congress Avenue built in the late 19th century. In 1910, 3 of the 6 spans were put in storage and five years later they were taken out and installed here over Onion Creek. That same year, in 1915, a flood washed them out and the remaining three spans from the original six at Congress avenue were combined to create this current bridge. That was 1922.

So this wasn't the first bad break at Onion Creek. Maybe the bridge was just trying to say "Slow down, hold on a sec, don't you know who I am? Let me tell you a story." The city closed the bridge thirty years ago this January 8th because she wasn't sound for traffic and was too expensive to repair. But the spraypainted barricade at one end doesn't invite too many pedestrians either. It's a shame because one bridge formed of six bridges should be considered a super bridge like Captain Planet, the Power Rangers' Megazord or the Thundercats' Voltron, not some aging iron novelty waiting for the next big storm.

Now, when I pedal slowly, just ahead of my freehub's ratchet, and listen close, just beneath the boards clapping from my tires' careful heel-toe, I can hear the rusting members whisper "w i t h   y o u r   p o w e r s   c o m b i n e d . . ."
Posted by bloggerz