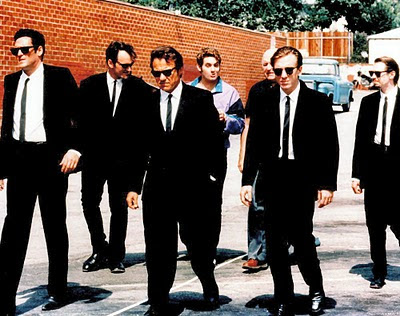 A couple office birthdays meant lunch out in town today, something with which I am always down. I was deciding who I was going to ask for a ride, but no one was walking to their cars. Everyone was just walking away from the office taking up the whole street like that scene in Reservoir Dogs. I hustled like Chris Penn to catch up as we crossed the intersection on our way to Congress Ave.

Turns out we were headed to Annie's, which, though totally bad ass in its own right, is where the comparison to Reservoir Dogs should end because of menu items like the brie, mushroom and roasted pepper panini, the ham and havarti on focaccia, and the panko crusted chicken schnitzel.

But it doesn't, because it turns out our firm did the interior for their renovation. Halfway through lunch the owner came out and visited and discussed chandeliers. Okay, maybe that does sound more Frasier than Reservoir dogs, but at least The InnKeepers episode of Frasier where he and Niles bought that French Restaurant.
Posted by bloggerz