Neither snow, nor rain... 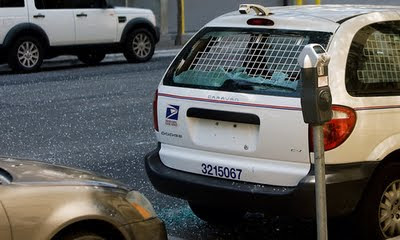 I'd read this morning about more glass falling from the new W Hotel downtown just a few blocks from where I work. I though it was messed up but that was all. That is, until our postman came in to the office this afternoon with an incredible story.

After delivering mail to the W, he exited the building and made towards his postal van when his phone rang. He took the call and stepped beneath the awning at the hotel's entrance. At that moment a sheet of glass fell over 20 stories and landed directly on top of his van, only feet away. Because of the angle of the glass when it fell, most of it shattered in to the street, but he was close enough, and there was enough of it, that his pockets and mail bag were filled with broken glass.

When I asked what he did next, he looked at me almost puzzled. He explained to me that once a mail carrier takes charge of their mail, they're obligated to complete their rounds--simple as that. He stood by and waited for the police to conduct their investigation before completing his rounds.

Neither snow, nor rain, nor heat, nor gloom of night stays these couriers from the swift completion of their appointed rounds.

I guess now we can add giant sheets of plummeting glass to that list. What a badass.