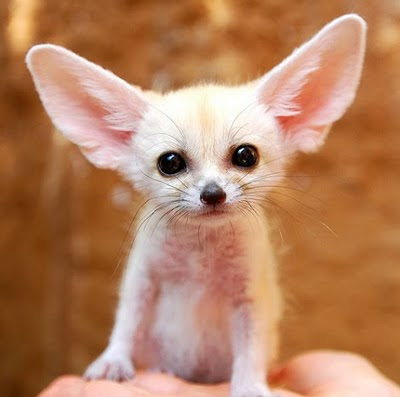 Yesterday, Heidi emailed Lauren (and Cc'd me) a link to this Craigslist post:

I have a three year old Fennec fox named Albert that needs a sitter to watch him during some weekends when I am out of town. This will have to be at your home, I have roommates with hectic schedules so this way works out best for everyone.

Albert only weighs in at about 4lbs, but is a bundle of energy when around other pets. He's never met another dog or cat that he didn't get along with. I pour litter on the floor of his cage for him to use as a litter box, which he is pretty good about using at my house...I can't say the same for when he stays other places, so if this is a deal breaker then so be it. He sleeps most of the day and is more active at night. You can just put him in his cage at night though, if you want to get some rest. Albert is easily bribed with fruit and veggies. He's had all his shots. Let me know if you are interested and what your other pets are.

The compensation was for $30/day, which Heidi volunteered to work out in trade, presumably by not behaving badly -- her usual offer.

As we discussed the merits of the possibility, Heidi interrupted with the exasperating admission that she'd already replied to the post and the woman was on her way with the fennec fox. Sure enough, she showed up within the hour on her way out of town.

Everything seemed to be going well. Heidi and the fennec fox, which we learned was named Pierre (Heidi called him "kitty"), seemed fast friends. Heidi showed him all her favorite places in the apartment and about the grounds. She introduced Pierre to the neighbors and to peanut butter. We had to put an end to the tour when we discovered Heidi had used her considerable influence and size advantage to convince Pierre into helping her topple the kitchen trash can. We discovered Heidi rooting around in an old bean can and Pierre snoozing on a bed of wilted field greens with the heel of a large peeled tomato resting on his thin-haired belly.

All was well and good until this afternoon. When we came home, both Heidi's kennel and Pierre's cage were open. Heidi was sitting demurely in the middle of the living room. Pierre was nowhere to be found. Heidi was utterly unhelpful in solving the mystery of the missing fennec fox. She offers an implausible story for the time we were gone and only hours ago we found her trolling Craiglist again. She contends she was looking for gigs to earn the money to pay back the woman for her fox. Two things trouble me about this, though. First, the woman will likely consider the cash offer, especially from the prime suspect in her fox's disappearance, vulgar.

And second, why would Heidi be more concerned with replacing the fox than looking for him...
Posted by bloggerz