The Tour de Austin within

Monday was day 3 of the Tour de Austin, a 3-part criterium series here in the capitol city. As a category 3 racer, my races were only 60 minutes each -- combined, no more than an early spring road race. Oh but these races were so much more than 3 hours of riding.

But I want to focus on the second day of racing, the Pickle Crit, so named for the JJ Pickle Research Center where it's hosted. The Pickle Crit was held on the Sunday before Labor day, the same day this summer's oppressive and record-setting heat wave broke -- blown away by upending gales of a passing storm front. 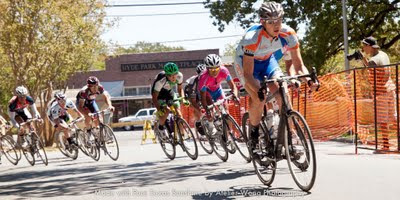 The course was described to each successive category by those who had just raced in terms of the wind. Not turn 2 or the straightaway or the backstretch, but rather the headwind, crosswind, tailwind. To make it to the finish line, one first had to make it through the wind.

Nearly 100 racers wheeled to the starting line. Only 37 would actually finish my race. Some crashed out; some couldn't hold the pace or were stuck behind crashes; some decided to save their legs for the third day of racing. I didn't really have a plan. Our team director (yes, we actually have a team director) gave me and my 3 teammates pretty solid instructions, but plans are for people who have the strength to execute them. I was racing like a gazelle in a cheetah costume -- I just wanted to fit in. 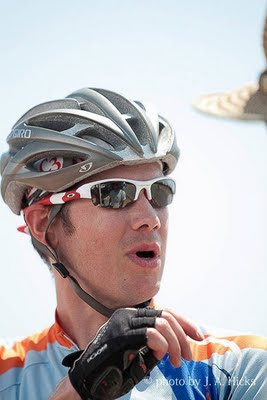 The race blew apart immediately. That fierce wind, some tight, fast turns, a couple crashes, obliterated the field. I started racing like Old Man Coyote. I had to use every shred of cunning to stay in the pack. I wasn't racing towards the finish line. I was racing for position into each turn; I was racing for a better draft; I was racing to move up on the downwind so as to lessen the impact of moving back into the headwind.

Every time a gap formed in front of me it felt like the devil had just finished fiddling and now I had better play my heart out or lose my soul. Every time I lost the wheel in front of me it felt like I was on Apollo 13 and an oxygen tank just exploded. I can't remember a race, in high school, college, or since, that I've come back from the brink so many times. Nor can I remember a race I've wanted to quit so badly. 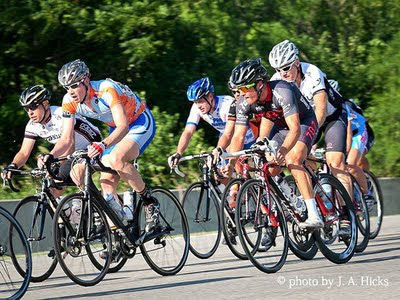 This race reminded me why I race, why I ride at all. It made me remember that the purpose of racing is to struggle. It's a crucible. Every race, every ride, is an opportunity to decide who I will be.

Late in the race I came through the finish line in tenth wheel. The following lap I was off the back with a sizable and growing gap. I tried to work with the other stragglers to just avoid getting pulled by the officials. And within just about a lap it actually worked! I couldn't believe it. We dropped our lungs and legs like ballast and flew forward like wild fools and we actually caught the pack! Safe in the lee of twenty riders, I surfed the draft from a crosswind back towards the front of the pack to stave off the ensuing downwind attacks. 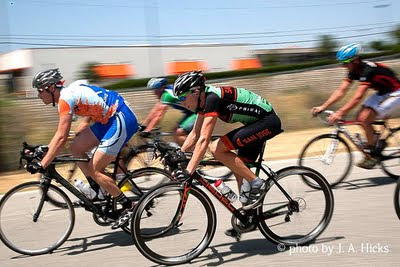 Thankfully I had enough to stick it through the remaining accelerations and attacks and actually sprint for the finish line. I earned 19th. And I learned that, at least on that day, I am a fighter.

photos by Jim Hicks and Patrick Wong
Posted by bloggerz