The route I discovered yesterday is turning out to be the straight-up cave of wonders. I was supposed to ride two hours today, but the whole way out felt downhill so I turned around ten minutes early — but the whole way back felt downhill too, so my ride was 20 minutes short. It was easy to imagine Jafar and Iago waiting for me at the top.

It wasn't downhill the whole way back. The route starts with a monster drop in — it's like a big wave surfer being towed in to the wave, or a skier getting dropped off by helicopter. I have to scrub all kinds of speed on the way down just to stay on the road through the hairpins at the bottom. Of course, I'm a notorious speed scrubber and treat my tires with the same sort of suspicion I reserve for people with neck tattoos. But even with my brakes stinking of burning rubber, I still have enough speed to justify jamming down the outside foot and stick my knee out.

The always-downhill, M.C. Escher roads alone are enough to bring me back for every tomorrow, but what happened today put the proverbial cherry on top of this are-you-kidding-me?! sundae. I turned off the primary road to scout a steep grade that I thought would be fun to descend. Not bomb down, street luge-style fun, but ride-the-brakes trials-style fun. The driveway was super steep (with fresh rubber from locked-up delivery truck tires veering off the pavement and into the dirt) and short, with a 90-degree bend, just before a small drop off, at the bottom.

It took two approaches to actually ride it. When I, safely, reached the bottom, I met Jerry who recommended I take the elevator back up. Thanks, I told him, but I would try to ride back up first. Strange that my response was bravado instead of incredulity at the mention of an elevator. True to my swagger, I made two honest attempts at climbing up what I'd just descended. Both times I heard my spokes creaking with embarrassment and lack of commitment — "is this guy actually tacking up this driveway?" And both times I bailed and rode back down, the second time over to the elevator.

Turns out, it wasn't really an elevator, but a Tram...in Texas. I'll let that sink in for a second. Though we're in the off season for this particular tram, it was still operational. I twisted the knob to call the tram down and waited for it to come to a complete stop before opening the double gates and boarding. I twisted the interior knob to ascend and then took a seat on the bench inside as the cables pulled the open air tram back up the hill.

Riding home was in the dark, country dark, and cold and wind, which always feels much faster than it actually is. Even faster because I didn't have to watch my struggling shadow on the hill in front of me on the climb out. 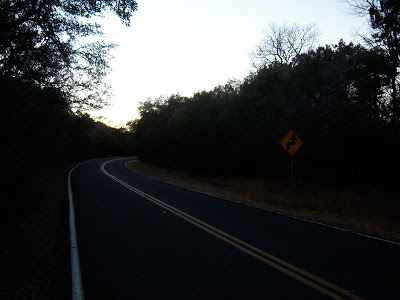